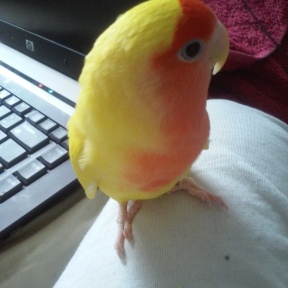 I decided with Lola passing and the new parrots we got recently, that it would be a good idea to have everyone checked out. So on Monday August 8th, 2016 (my son’s 10th birthday) I called my original vet but they had no openings until that Friday, so I turned to the internet. Since I don’t have average birds, I can’t just bring them to any type of veterinarian. When looking for a vet you have to find an exotic birds/Avian vet. I live in Toronto, Ontario so the only vet for parrots I knew about was The Links’ Road animal Clinic and The Hospital of High Park. From researching, I have found many more. This just goes to prove how far along parrot ownership has come over the years. Anyhow I found one in Mississauga called Britannia Animal Hospital;.’

. They were able to see Nyx and Boss that afternoon. So I packed up my three kids and off we went!

We arrived approximately 15 minutes late for our appointment. It’s a nice spacious building located right on the main street, it would be hard to miss especially if you’re looking for it. The staff was friendly and we didn’t have to wait long for service, I would say about five minutes after I completed the paperwork.

This is the reception area. Not my picture, it is off their website.

We were shown to the avian exam room. Nyx was removed from her carrier with a towel. They weighed her, listened to her heartbeat and looked her over. I didn’t want her wings trimmed so they only did her beak and nails. (I had just done the nails so there wasn’t much needed there but it was included in the charge.)  Advised me of dangerous foods, for example told me to barely ever give grapes and if I do only in small quantities. I never knew grapes was an issue so this was a surprise to me. Nyx appeared great.

Next the doctor did the same thing for Boss. The side of his beak could not be done because there is a big blood vessel there. Boss also appeared to be in great health. 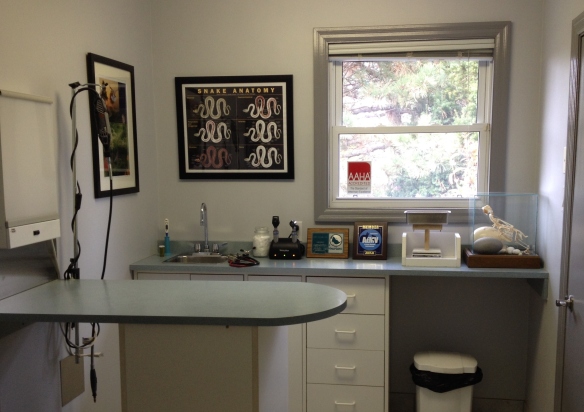 Their avian exam room off their website but this was the room we were in.

No blood work was done as they both weighed under 100 grams and because of their small size, it’s a risk factor. I was advised to do a fecal exam but passed as it was 70 bucks (almost the price of the examination itself). For the visit I was charged 210 for everything. The vet recommends you bring your parrots to them every six months for a checkup however I’ll be honest, I only bring mine once a year, if I feel like its needed… Now don’t condemn me, I know people who never bring their parrots to the vet so I think I’m doing pretty good. Let me explain this for a second….

If my parrots’ diet hasn’t changed, nor has my routine then I don’t feel the need to check in with the doctor. I clip their wings if needed, like when they’re getting hormonal otherwise they stay flighted. I trim their nails every six weeks and I check their poop every day. So unless I see a need for the vet like a change in their appetite or energy level or poop, I don’t see why I should bring them. The same goes for me and the kids, we go to the doctor when something is wrong.

Plus taking all my parrots to the vet for their annual checkup runs me about 1500 CAD each time. Yes, if I can’t afford it then maybe I shouldn’t have parrots and that is why unfortunately my flock is not open to any more.

God forbid one of my parrots actually get sick then the cost would be even more but I have a credit card devoted only for my parrots (just in case :)).  Parrots are fun but the visits to the vet ARE NOT! Definitely can put a dent in your pocket. I’m hoping one day they will come out with Parrot insurance but for now only dogs and cats get that option in Canada.