I decided to start this post because I have soooo much to say! I’m 31 years old (still can’t believe it!) and I live in Toronto, Ontario, Canada. I just wanted to take this time to actually give you a brief rundown of what type of posts you will be seeing on here. Posts will be about parenting my beloved Parrots!! Everything you need to know and anything you want to know just ask!! I’m not a professional trainer but I do have a love and passion for PARROTS!!!

So let me start with the pg13 stuff first lol…. My PETS!

I’ve went through it all from 2009 to 2012 I went on a pet frenzy trying to find the perfect pet for me and my son. I was having issues… The very first pet in our home, we got from a friend and it was a 10 week old kitten who we named Diamond.

She was great when we first got her but I soon came to realize a 10 week old kitten with a 3-year-old boy was NOT the perfect combination for me. Now it may work for others and if I wasn’t so consumed with school, work, my son and just getting used to being on my own, it may have worked for me but nope, I just couldn’t do it. So in September 2010 a whole year and some later, I decided I had to let Diamond go. She was pooping on my floor instead of her litter box, disrespecting my rules and it was just a mess. 😦 I do miss her at times but it was best for all of us to part ways.  After diamond came Sky, the cockatiel bird that I got from a vendor in the Jane and Finch mall… I should have realized something was wrong when I seen how hard it was for him to get her out of the cage but at this time I was blind to all that and thought I was a miracle worker. Plus how hard could taking care of a small bird be…..

BOY was I wrong…. My sister had a cockatiel named Jake (they soon realized Jake was actually a girl) and it was so tame and nice, I thought what a perfect pet and that’s why I went to go get this one. Well, this one did not want to be tamed, did not want to play with us and LOVED to bite hahahaha. Very aggressive. So I gave her to my sister thinking she would learn from the other bird. My sister took her in and Jake and Sky got along too great! They ended up bonding together even though they were both girls and my sister lost her nice, tamed bird. I even bought a book on cockatiels and nope she just wasn’t the pet for me and my son. My niece’s grandfather was a breeder of cockatiels and two minutes with Sky he had a tame, nice bird… I don’t know how he did it but he did. **Update on Sky: She is tamed but is a breeder bird. Apparently she loves to have babies. Go figure…**

Now I don’t want you to think I’m a bad person but I definitely spent like $10,000 dollars on cages, accessories, toys, pets and was unsuccessful finding the perfect pet. I spoiled every single one but after a while I was like nope this is not the one for us and I would have to find a new home for the animals. So I went through 6 rabbits, 6 dogs, 2 chinchillas (now those were my ideal pets but unfortunately they ended up passing :(), a hamster, 5 guinea pigs, and a Chinese water dragon. Anyhow, I finally stopped and just so you know I found homes for all of them. So I’m not an evil person.

The pets we do have now, who I will be blogging about are: a leopard gecko, blue tongue skink, bearded dragon, a Galah cockatoo aka rose breasted cockatoo and an African grey parrot.**Update: Pets are: Bearded dragon, African Grey parrot, Quaker parrot, Black capped conure, Indian Ringneck, Lovebird and green naped lorikeets.

The Leopard Gecko I got from the person, I traded my Chinese water dragon with. Now the gecko is up for sale not because I don’t want her but because she is my son’s pet and he is not doing well in school nor being responsible for caring for her. Her name is Sunshine and she is about 7 years old now. Still love her though, so for as long as we have her she will be included in this blog. We have had her for 2 years now. **Update on Sunshine: She found a new home.** 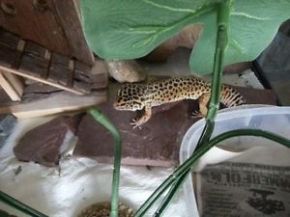 The Bearded Dragon is our longest pet, we have had him since he was a few months old and he was purchased from P.J Pets. He is about two years old now. He has been with us through a lot. My son does chill with him often. He may not check his water bowl, or clean his cage as often as I would like but he will take him out to watch tv with him. Put him in a box and sleep near him. Let him out to run around in his room and shower him. Show him off to his friends and just relax with him. We call him, Ray. **Update on Ray: he is still with us. I just bought a leash so he can go outside with my son more often**

Next my son has a Blue tongue Skink, he is our second longest pet. I think he is about two years old also and doesn’t really come out of his cage much. He is an Indonesian Blue tongue and hisses when we open the cage and touch him. But has never bit any of us. I would recommend a blue tongue to anyone as I LOVED feeding him food from a spoon. This Blue tongue’s name is Junior and he loves his Cat food! **Update on Junior: He passed in May 2016. R.I.P. We never really knew his age as he was a rehome at Petsmart so I’m thinking he was older than we originally thought.** We gave his cage to my nephew because we forgot that Ray, our bearded dragon could have used the 40 gallon terrarium. I miss him.** And of course that’s my precious troublemaker in the picture below, My son who I will refer to on this blog as “JuniorJay” lol. If you want to know more about my son and his adhd journey you can click on the other tab to read about that. I will be opening a new blog for that so stay tuned.

Now onto My PETS! Let’s start with my Galah Cockatoo aka Rose breasted cockatoo. Lola was born on May 12, 2012. I received her in August 2012. Paid almost $3,000 for her. She came from a reputable breeder, I would definitely go back to that breeder again. I love Lola but I made many mistakes even though I read so many books before getting her. I listened to the vet that came to my house to do her wellness and dna check which I have regretted ever since. Now it may not be the doctor’s fault but she made Lola’s first experience a horrible one and Lola had only been with me for a little bit prior to the doctor coming.  Anyhow I will go more into detail when I do a blog strictly on Lola. Point being is, I’ve been having issues with her to the point I even brought her to another vet but I think Lola was seriously traumatized by the first one :(.  Anyhow this is my Lola and I’m working very hard to get her back to the loving, non-scared, fun playing parrot she came into this household as. **Update on Lola: Lola has died. She died in my arms with me telling her how much  I love her. Seems as if she had a seizure… I completely take the blame, as I feel I just did things wrong and it still hurts when I get up and Lola isn’t there to greet me… I dedicate this blog to her and she is my reason for trying to get parrot information out there so people realize how important it is to love these creatures and nurture them.** 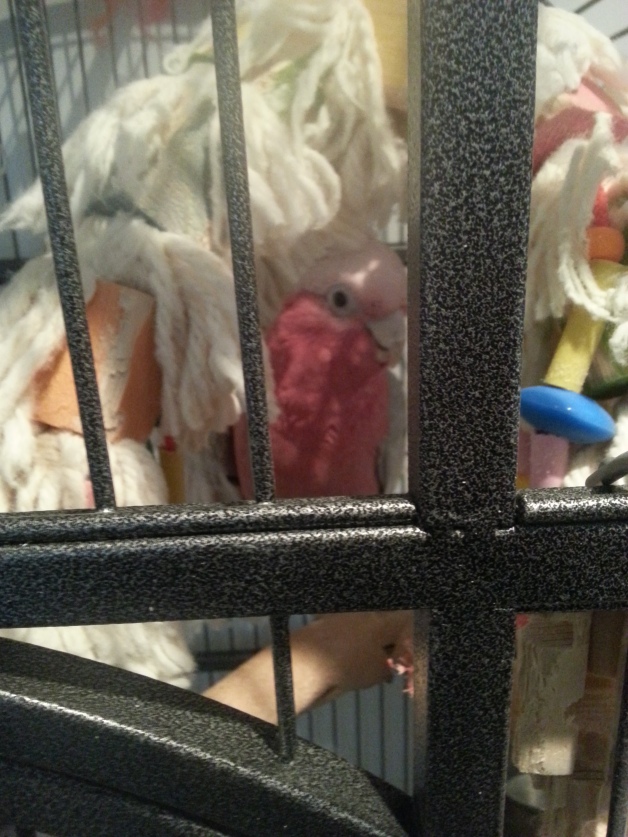 Now last but definitely not least… please welcome Mr. Talkative! My African Grey Parrot who was born on June 12, 2012 right behind Lola and came into our household the last week of October so only a few weeks after Lola. I did everything all the books tell you to do about introducing them and keeping him quarantined for 30 days etc. I took him to the vet for his wellness check and I also got him from a breeder, not the same one as Lola but still a breeder. Great breeder, I would buy from her again. Unfortunately Grayson and Lola even after being together for two years have still not bonded. Grayson can be intimidating and Lola is now a “chicken”. However now that I’ve been home for a few months and have done so much more reading and stuff I’m hoping to start trying again because I refuse to give up! So I will definitely be blogging about their interactions. Anyhow, Grayson talks TOO much he says Hi, Hello, What’s your name, Grayson, Lola, Mommy, Stick them up…. The list goes on and on… I’m hoping to train him to identify letters and numbers. As for Lola, I’m hoping to train her on more tricks. Anyhow that’s it for my pets. **Update on Grayson: He is still here flourishing, I’ve decided to keep him fully flighted so we are currently working on trying to get him harnessed trained.**

I love all of them but of course Grayson and Lola are mine! I was wondering if Lola would be happier somewhere else but I can’t let her go without putting in the work. Since I’ll be off on Maternity – I should have more time and I plan to take her everywhere with us even if she decides to stay in her travel cage, I just want her around so she can get more exposure and hopefully that will help with her socialization skills. She is my biggest worry right now. **Update on pets: We have expanded our flock so we have added a Quaker parrot named Piper  – 2 yrs old, we got him when he was a baby. A Lovebird named Boss – Born here (I’ll explain that story in his personal blog) He is one years old now. A Black Capped Conure named Nyx – She was rehomed, we received her about a month ago – She is 3 yrs old right now. A 3 month old Indian Ringneck renamed Ringo – he was also rehomed,  the family had him for about a month named him Pepper and decided they couldn’t afford him, they had him living with their cockatiels all in the same cage. Also I’m currently waiting to acquire a baby Rainbow Lorikeet – right now it is 5 weeks old so still on 3 handfeedings a day, definitely not ready for its new home as yet. So stay tuned!!!**